Showing posts from 2011
Show All

November 20, 2011
Exeter Writers Short Story Competition 2012 has been launched. The main prizes are £250, £100 and £50, with an extra prize this year of £50 for Devon writers. Entries are invited from all writers; the closing date is 31 March 2012.  See our Competition page for full details . Addendum : Due to circumstances beyond our control, we are now asking entrants to send submissions to Honeysuckle Cottage, The Strand, Lympstone, Devon, EX8 5JR.
2 comments
Read more 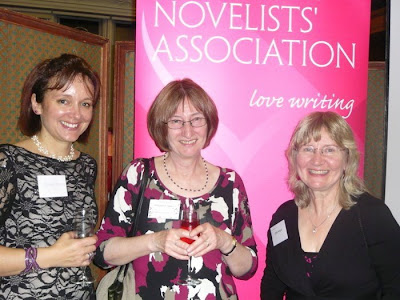 Exeter Writers Margaret James, Sophie Duffy and Cathie Hartigan went the Romantic Novelists' Association Winter Party in London last week. It was a very sparkly occasion held in the library of the Institution of Mechanical Engineers, Birdcage Walk. Much smiling, nodding and important networking took place, wine was drunk and unsuitable shoes put up with for the duration. Katie Fforde, President of the RNA, couldn't have been more delighted to meet Sophie. Katie had judged Sophie's novel The Generation Game to be a worthy winner of the Yeovil Novel Prize and she was thrilled to hear that the novel had been published to such acclaim. See also Creative Writing Matters .
1 comment
Read more 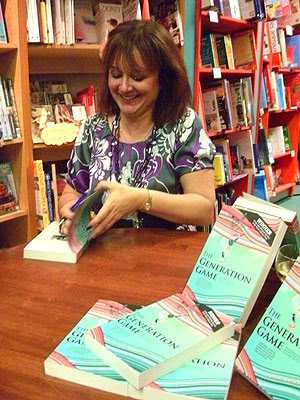 Monday saw the regional launch of Sophie Duffy's novel The Generation Game at The Torbay Bookshop in Paignton. As reported earlier - see Sophie Duffy wins Luke Bitmead Bursary - the novel was published by independent publisher Legend Press as the 2011 winner of the Luke Bitmead Bursary. There was a good turnout of fellow Exeter Writers members, and 65 copies were sold. See the Legend Press site ( 'The Generation Game' by Sophie Duffy) - and Sophie's own site ( A Tale of Two Book Launches ) for more details and photos of the event.
1 comment
Read more

June 06, 2011
Our thanks to all who sent entries for the Exeter Writers Short Story Competition. The judging is complete and the following are the winners – our congratulations to them all. The winning stories are online; follow the links. First prize: Until planets slip their tracks by Joanna Campbell Second prize: The precious things of Imogen’s library by Douglas Bruton Third prize: Looking for Michael by Sarah Hegarty Runners-up: (not in order of preference) A library full of of murder by Simon Whaley My name is George by Veronica Bright The cubbyhole by Linda Mitchelmore Letter to follow by Norma Murray Into each life by John Morley Looking for Iago by Bruce Harris Moving backwards by Sarah Evans
Post a Comment
Read more

June 06, 2011
word central just contacted us with updated information. As Exeter Writers is currently full and not accepting new members, this is a possibility if you are looking for another writers' group that meets in Exeter. What is word central ? wordcentral is a friendly, informal group who meet to read and discuss our work and share information, contacts and news. Who can attend? Writers of all genres are welcome – fiction, poetry, non-fiction – come along and find out what we're like. We're a self running group with writers from all genres who have some experience. When do we meet? First and Third Thursday of the month from 6pm to pm. Where do we meet? The St James room at St Sidwell's Community Centre , Sidwell Street, EX4 6NN. How much does it cost to attend? Members are asked to donate £3 per session. For more information please email word.central.exeter@gmail.com or visit our blog: http://word-central-exeter.blogspot.com/ Please note this is not a cla
Post a Comment
Read more

Until planets slip their tracks / 1st in 2010/11 Competition

June 06, 2011
Until planets slip their tracks by Joanna Campbell Nate knew how to hypnotise a chicken. But he knew next to nothing about me. Didn't matter none when we were growing up in Stone Gap. Still had the same old dirt in our dungarees nigh on every day. Long dusty summers never ended. But only I knew how I loved the bones of that boy.
3 comments
Read more

June 06, 2011
The precious things of Imogen’s library by Douglas Bruton Imogen makes paper from the wood of mulberry trees. It is sometimes called ‘rice paper’, though it is not the kind that sticks to the bottom of currant buns in the baker’s shop, brittle and melt-on-the-tongue paper. No, mulberry paper, used once to make packets for rice, is something beautiful and strong, and all the words written there will last beyond her life and his.
Post a Comment
Read more

June 06, 2011
Looking for Michael by Sarah Hegarty ‘What brings you to Africa, Jill?’ Dana’s voice rises and falls behind me in the afternoon heat.             She appeared at my door ten minutes ago, opening it as she knocked. I was sitting at my desk, thinking about Michael. Now I can tell she’s scanning the small room, searching for photographs of grandchildren; maybe an airmail letter; proof that someone cares.             I keep my back to her. ‘Oh, you know – to do my bit for humanity.’
3 comments
Read more

May 07, 2011
Exeter Writers member Margaret James will be at Waterstone's Roman Gate store in Exeter between 2pm and 5pm on Saturday, May 14, to sign copies of her new novel The Golden Chain . The Golden Chain follows The Silver Locket as the second book in a trilogy of wartime romance. As it's published by commercial women's fiction publisher Choc Lit, there will be samples from the chocolatiers Montezuma's.
Post a Comment
Read more 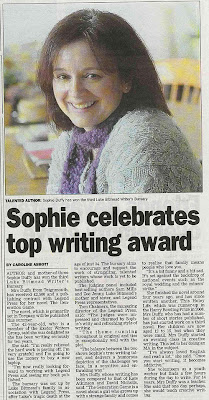 Scan and text reproduced by permission of Express & Echo . From the Exeter Express & Echo , news of a success for one of our members: Sophie celebrates top writing award AUTHOR and mother-of-three Sophie Duffy has won the third Luke Bitmead Writer's Bursary. Mrs Duffy, from Teignmouth, has received £2,500 and a publishing contract with Legend Press for her novel The Generation Game. The novel, which is primarily set in Torquay, will be published this summer. The 42-year-old, who is a member of the Exeter Writers Group, said she was delighted as she has been writing seriously for ten years. She said: "I'm really relieved the hard work is paying off. I'm very grateful and I'm going to use the money to buy a new laptop. "I'm now really looking forward to working with Legend Press and seeing my book published." The bursary was set up by Luke Bitmead's family in association with Legend Press, after Luke's tragic death
Post a Comment
Read more

February 02, 2011
"Some sow, others reap" We are sorry to announce the death of Marjorie Stiling on 18th January at the age of 93. Her funeral took place on 31st January at the Devon and Exeter Crematorium. Marjorie was one of the first eight members of Exeter Writers when the group was launched in 1950, and, as far as we know, the last survivor of those founders. She kept up her interest in the group until the late 80s, and her report of its history (originally as "Exeter Writers´ Circle", later amended to "Club") can be found by clicking on History . Her self-published crime novels, Whisper Murder (2000) and Murder by Proxy (2007), and a short non-fiction work, Famous Brand Names, Emblems and Trademarks (1980), are available through Amazon.uk. Marjorie never achieved major success with her writing, but she left a lasting legacy in Exeter Writers, still going very strong sixty years later. We like to think she would be proud of us. - CG
Post a Comment
Read more

January 03, 2011
One of our members, Margaret James (author of The Silver Locket and Elegy for Queen ) is running a workshop, Writing Your Novel, at Exeter Central Library on Saturday 8th January. The event, one of a series held by CreativeWritingMatters in Exeter, is from 10am-3pm. For information and booking, see www.creativewritingmatters.co.uk .
Post a Comment
Read more
More posts