November 04, 2017
Now that the 2018 Exeter Writers Short Story competition is open for entries, we thought we'd get you chomping at the bit with a series of blog posts around story craft. Today we're profiling last year's first prize winner Sharon Boyle, whose story 'Celluloid Job' can be viewed here. 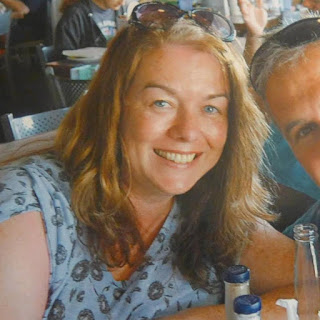 Hi Sharon! Thank you for letting us profile you. Tell us, what do you write?

Short stories, flash and the occasional poem. I have two finished YA novels in a drawer which when written were destined for Kindle but when recently reread were demoted to kindling.

When not working or involved in family life, I write at the dining room table surrounded by washing, homework and other mess. The dining room is a thoroughfare to the kitchen so I am bothered by other folks’ chitchat - a lot. O, for a heated shed.

Winning the Exeter Writers Short Story comp, of course! Apart from the kudos it is my most lucrative win.

My nana (93 and still going strong) loves watching B&W films and tells ‘during the war’ stories on a loop. (She never drove a tank but she did dance with dashing Americans.) I like injecting a bit of quirkiness or humour into a story and Stanley came naturally as a stooge to Mrs Dewhurst.

My first dream job was not to be a writer but an astronaut. I told my secondary school guidance teacher of my plans and, after completing a questionnaire, left his office with a piece of paper suggesting chiropody.

CS Lewis. I adored the Narnia series as a child, especially The Voyage of the Dawn Treader and wanted to write a stonking set of books like that. I’ve always had the romantic notion of sitting at a desk overlooking an enviable view, sipping wine and gently tapping out a novel that needs no revision or editing. That fairy-tale bubble burst in the first year of serious scribblings.

To have a few writing projects on the go at once.  That way, if I get temporarily frustrated/blocked/fed up with one project I switch to another.

I’m very reticent on the self-promoting front, a mix of laziness and cluelessness, and have only just started a blog (really, there are just four posts). It can be found at:
https://boyleblethers.wordpress.com/

Thank you, Sharon!
With Winners