November 16, 2017
Now that the 2018 Exeter Writers Short Story competition is open for entries, we thought we'd get you chomping at the bit with a series of blog posts around story craft. 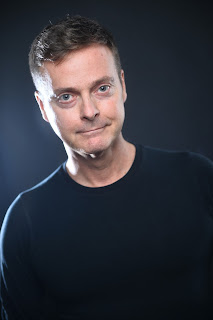 Hello, Christopher! Thank you for letting us profile you. Tell us, what do you write?

A lot of my stories are flash fiction. My debut collection of flash fiction, Other Household Toxins, is coming out later this year from Matter Press. In terms of style, I write literary fiction leaning often towards magic realism, surrealism, and absurdism. But I also write realistic stories and travel articles. I blog at www.imustbeoff.com where I sponsor an annual travel writing competition.

I used to write better in the early morning hours – 4:00-7:00 – but that’s changing. I often write late at night now or on the train. Sometimes if I have a few hours in the middle of the day, I’ll sit in a coffee shop and write until I drift off to sleep. My handwriting is horrible, so I write best when I have a keyboard.

When a sentence clicks and feels perfect, when I get the rhythm just right, when a story punches me in the gut and I love what I’ve done regardless of who else does – that’s a great moment.

Difficult question. I suppose it was when someone told me that most of the Indian restaurants in London were run by Bangladeshis, but I’m not sure I thought of writing the story that ultimately developed then. The story “Fences” developed over a period of three or four years.

Unfortunately, I’ve kept very few secrets. Quite a few people know quite a lot about me. I used to be a singer. But I’m from Nashville where everyone’s a singer.

Yes, Virginia Woolf. In graduate school, I read almost everything she wrote. She changed the way I thought about the cadence and emotional impact of my own writing. Of course there have been lots of other writers who’ve made me reconsider how I write, but Woolf was the first who made me think I could write.

There is so much advice out there. Maybe the best is not to make your characters’ lives easy. Keep the level of conflict and tension high as long as you can before resolving it. I think that’s good advice. In terms of very short prose, I think the best advice has been to begin as close to the major conflict as possible (avoid excessive scene-setting) and give the reader a satisfying ending that does not try to tie up the story neatly.

If I were giving advice, I would say write the story that’s important to you. If you’re writing just to satisfy the need to craft a clever narrative, it will probably leave the reader cold. Once the reader sees you trying too hard, it’s all over. Colin Winnette is one of my favourite writers because he manages to create memorable, original narratives with bold, simple language – like a gymnast who makes that quadruple backflip look effortless.

I’m on the editing team at SmokeLong Quarterly, an online journal devoted to flash fiction. This year I’m also a consulting editor for The Best Small Fictions.

As I mentioned up there at the beginning, my debut flash fiction collection, Other Household Toxins (Matter Press), may already have been published by the time this interview comes out. I’m super excited about it and can’t wait to share it with the world.

On July 21-22, 2018 I’ll be conducting a workshop at the Bath Flash Fiction Festival held in Bristol this time. I hope to see some Exeter folks there.

Thank you, Christopher!
With Winners