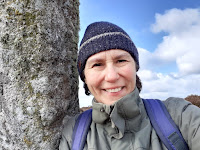 Marta Emmitt is the winner of our Devon prize.

How did you feel when you found out that you'd won?

I felt incredibly pleased and honoured to be chosen for the Devon prize.   I’m not a “native Devonian” but I’ve been living here for over 10 years, and this felt like a beautiful acknowledgment of my connection with this place.

Where did you get the idea for your story? What came first, character or plot?

I’ve been fascinated by myths and folklore around shapeshifting for some time, and especially the myth of the Selkie.   I’ve also been trying to write something around grief and loss, and the power of the sea.   Then the main character came to me, so character first!

How long have you been writing? Is this your first win?

I’ve been writing for as long as I can remember.   This is my first fiction win.   In 2000 I was shortlisted for the Verity Bargate award for emerging playwrights, which was incredibly exciting as that is a very big competition.  That led to me becoming Arts Council assisting Writer in Residence at Soho Theatre for a year, wonderful.

What is your writing process?

I get fascinated by an idea, rather than a plot.   Then I allow a character to emerge, try and find their voice, and listen to what they have to say to me.  I don’t make a plot plan, ever, I find that restricts me.  I might make some notes about where I might like the story, or novel to go, keeping in mind that these are only notes and not instructions!  I try very hard not to censor or plan when writing a first draft.  I like taking long walks with my dog, letting words spin out, rushing back and writing down what comes to me.  I usually write a rough draft, then put it away for a bit, and then do a rewrite.

Because I began as a playwright, I find the character’s voice very important and often like to write in the first person, or following a character closely.    I often write several drafts.

Pen and paper or straight to screen?

Straight to screen, although I do keep a notepad around always to make notes and jot done images and bits and ideas.

Do you have any advice for other short story writers?

Short stories are everywhere.   Little incidents can easily become stories.   A short story is a little like a long poem, and you can allow yourself to be guided by images and juxtapositions rather than trying to follow a plot.   For this story I followed my main character very closely, her emotions and the sensual aspects of her physical world.   A short story can emerge this way as well, following a single character closely and being driven by their feeling and desires.

Where did you hear about our competition, and what made you enter it?

I joined Devon Writers on FB and the competition was advertised there.   I entered last year as well and was shortlisted, so decided to try again this year with a different story!

Thank you for sharing your writing process with us, Marta.
You can read The Fisherman's Wife here