Our Deepest Sympathies to the Family Of Ena Doak 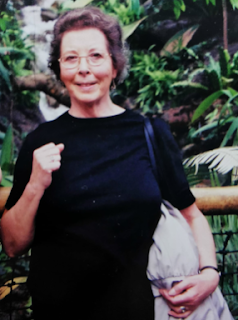 We are sorry to announce the unexpected death of former member of Exeter Writers, Ena Doak, on 23rd April, at the age of 88.

Ena Penn was born in 1932 in Friern Barnet, the youngest of seven children, and grew up in London.

On leaving Finchley County School at the age of sixteen, she went on to work in a number of different roles, from the scarf hall at Liberty’s to various secretarial jobs.

She met Loel Doak at a party when she was twenty seven, and they married in 1962. They had two children, Andrew and Euan, and moved to Exeter in 1974, where she lived for the next 40 years. Loel sadly died of cancer in 1999.

As well as her enjoyment of reading and writing, she was an enthusiastic classical music fan, a member of the Devon Archaeological Society, local book and film clubs, a skilled knitter and cross-stitcher, and an excellent baker.

Ena was a long-time member of Exeter Writers, from around 1994 until she left in 2014 to move to Manchester.  Many of us here remember her well, and with great pleasure.  Although a regular contributor to the group, she was never one of our more vocal members, but what she said was always to the point and wryly humorous.

Ena never sought fame or fortune with her writing, but wrote simply because she enjoyed doing it — an excellent reason. We were all sorry when she decided to leave the group to go to Manchester.

She had a full life and will be greatly missed by everyone. Her funeral took place on the 19th May.

Fay Knowles said…
Deepest condolences to Ena's family and friends. Ena was a lovely lady. Very sincere and easy to get along with. I knew her when she and I belonged to the Exeter & District Writers' Club (the forerunner of Exeter Writers). She was always very passionate about writing and a great support to me in my writing career. We emailed each other from time to time after I returned to The Bahamas and we used to exchange Christmas cards. When she told me she had moved to Manchester, I was pleased to hear that she was very happy there. I really miss her friendship.
22 June 2021 at 20:32