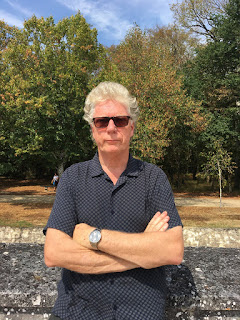 Hi Simon, is it bad that I’ve known you for eighteen months as an Exeter Writer but I didn’t realise you already had four other books under your belt? But I suppose we’re always talking about our current news that we don’t really mention our past achievements in meetings!

Hi Jess, I don’t think writers make a big thing about their past work. I think you’re only as good as your present material and that only stands up if people like it when they read it. I have also been a ‘stay-at-home-dad’ for 4 children for 20 years. Writing has always been a secondary occupation, if you want to call it that.

The reason I am talking about my new book Eternity Leave is because it embraces the highs and lows of that experience. I like to think it’s my best book in terms of the standard of writing and that anything preceding it is part of an apprenticeship.

Well it’s great to have this time to talk to you about your new novel, Eternity Leave. First off, the cover is very attractive. I love the strong yellow with the shadows of the kids. Did you design it yourself? Tell us a little about this. 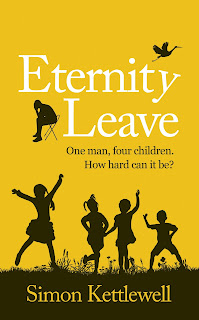 I used a company called Bespoke Book Covers to design the cover. I did have a lot of input, but in the end, they drove the ideas. I am delighted with the finish. This is the second time I have self-published.

A small company published my previous novels and I am, despite doing this myself, represented by an agent where quite a number of their authors self-publish if they feel the subject matter and the climate are right for them to do this. The truth is, if self-publishing works, you cut out the ‘middle people’ who take a significant proportion of the earnings.

In terms of cost, you get what you pay for. I investigated a lot of companies; some have designers who bid to undertake the work, but these can often prove very expensive, stretching into thousands.

The beauty of Bespoke Book Covers is that you can make as many changes to your cover until you are 100% satisfied. This is a rare feature and for me the most important. Nevertheless, a budget of several hundred pounds is not unreasonable. After all, aside from the text, the cover is vitally important and I think Eternity Leave is testament to that.

I immediately bought your book when you released it out of solidarity for a fellow Exeter Writer Indie Author, but I have to say I was surprised by how well written and enjoyable it was. How did you come up with the idea for the story?

I don’t think of myself as an ‘indie’ author. I’m not entirely sure I understand the distinction between ‘Indie’ and ‘traditional’ anymore.

There are so many publishers who use Amazon just as a digital and sole market route for their works because the truth is, that fledgling authors rarely get enough shelf space in the book shops to be seen.

The reason I published this myself was because my agent didn't feel that the market was strong enough or that publishers were willing to buy certain books at this time. She wanted to wait until things settled down to secure a good deal and I didn’t, so with her blessing I did this myself. I am fortunate to have the choice.

The issue with self-publishing is that anyone can write a book and publish on Amazon. Readers though, are very discerning and books that aren’t good enough simply won’t get word of mouth recommendation and don’t sell.

My last foray into self-publishing with my novel The Truth About Us sold over 30,000 copies and has 500 reviews. It still sells 5-10 books every week, five years after it was first published. After this, the attraction for self-publishing is strong for me, but Eternity Leave would have most likely have been published via the traditional route, but not for a couple of years. I didn’t want to wait because I feel the book is particularly current and the success of The Truth About Us no doubt contributes to the amount of sale I have with this new one.

One of my favourite aspects of the book is the relationship dynamics of the characters. You capture the love, the messiness, and conflicts of family life so beautifully and any parent will be able to relate to them, male or female. But I particularly liked how societal pressure of gender roles played a part in how Brigit and 'Dad' react to situations.  Where did you draw the inspiration for your characters?

I deliberately didn’t give the narrator a name. I tested this out with a number of people and they all felt that although it was obvious who he was, it helped to avoid the narrative becoming too introspective. And gave the stage to the cast of characters I have moulded either from experience or from my imagination.

The book is based on my experiences as a stay-at-home-dad, but I wanted to write it as a novel that sounded like a memoir. I took many of the people I have known and met on my parental journey and metaphorically ‘liquidised’ them, retaining only those characteristics, which would add to the story.

The family itself is much more true to life. My partner does run a large hospital and we do have the same number and gender combination of children. It helped keep the central characters more authentic and I hope serve as a real memento of something very special. I knew the only way for this to work was to make the emotions, conflicts and ultimately the love for family as real as possible.

Tell us more about your book. Without giving away the plot, what is the story about and why should people read it? Who would enjoy it?

The story is about a man who through a series of ill-thought-out decisions finds himself in the position where it seemed at the time, logical for him to take on the role of child carer. Within 18 months there are 3 children under the age of two, and one more to come a couple of years later.

This man has never even held a child before and is suddenly thrust against the stark reality that he is trying to do a job he knows nothing about. Despite claims that there are thousands of men queuing up to change a pile of nappies as high as Kilimanjaro, this is largely untrue.

He finds himself in a sea of what appears as confident, competent women doing what they have done, brilliantly for thousands of years, reinforcing his feelings of being a fraud.

Despite the hours of hard graft, he still struggles with the idea that this is not a ‘proper job’. His self-esteem plummeting he embarks on filling this gap with smallholding and writing novels, both of which almost break him. There is a point in the book though, where he begins to realise that he is becoming proficient at what he is doing and slowly begins to see it’s virtues.

However, the feelings of isolation and lack of a sense of worth still trouble him and pervade the book and act as a vehicle to highlight the real challenges for both the genders in this role. As the book progresses, the past begins to roll out behind him, so he can look back retrospectively at what he has done and contrast this journey with the present day. The book is told between the ‘before’ and the ‘now’ and I hope ends up as a warm and redemptive story which would appeal to any parent.

Like many people reading this post, I am intending to finish and publish my novel this year. Did you ever consider traditional publishing, or did you go straight to the Indie route? Do you have any advice for writers still on the fence about which route to take?

I spent many hours in search of an agent until I eventually found one. I do think by doing this I became a hostage to vanity and I have sold many more books by self-publishing. However, the discipline of finding an agent definitely improved my writing. The truth is that to find an agent or a publisher you simply have to write a bloody good book. I would say that if you think your book has a wide audience appeal and is current, it is worth pitching it to agents because they know the business and are more likely to secure a good deal.

Nevertheless, it is important to ask yourself why you want to put the book out there in the first place. Is it because you want the simple achievement of having a published book, or want to make a career?

There are no easy answers here, and getting a traditional deal does not mean the book will succeed. For example, my agent felt that The Truth About Us was ‘too quiet’ to gain word of mouth recognition and so she wouldn’t pitch it to publishers. I think after 30,000 copies sold, she didn’t get that quite right. Follow your gut on that one.

In the midst of that thought, I think it is really important to know what you want from your book. If it is to sell in the supermarkets and bookshops then find an agent. Even if you do though, it is not the golden chalice.

I have always put the children first. Writing is something I do on the fringes. A lot of writers have a structure to their day. I don’t. I write anywhere and when I have an hour or so.

I wrote my novel The Truth About Us while I was travelling in India. I wrote The End in a hostel in Kerala. If you want to do it, you will find the time. I think if I waited for ‘the muse’ I’d still be sitting here. I’m not precious about environment or quiet. There is very little in a house of 6 people!

After each book, I promise myself I won’t do another, but I usually do. Right now though, I’m at the ‘never again stage.’ I think after lockdown, I might probably keep this stance, as there is a lot of motorbike riding to be done and rubber to be burnt!

Thanks so much for talking to me about your new book. I have one last question before we finish off, if I may?

In what ways has being part of Exeter Writers helped you as a writer? And would you recommend aspiring writers to connect with other writers by joining or forming their own groups?

Looking after and giving so much time to the children, I became very isolated. This was the reason I contacted Exeter Writers. They felt the samples of work I gave then were of a good enough standard and they allowed me to join.

It is so nice to be with a bunch of like-minded people all with different writing aspirations. They have been so supportive to me and yes, always out of solidarity, support a new piece of work.

It is always a pleasure to see them and engage in our debates and subjects I wouldn’t ordinarily be able to talk about in every day life. I am very grateful.

The pleasure was all mine! And thanks to all you wonderful readers who are still here at the end. If you'd like to connect with Simon he is on Twitter, Linked In and has an Amazon Author Page. 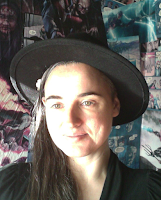 Jessica Triana de Ford is a freelance copywriter writing content and websites that helps creative people engage and grow their audience. She is also Blog and Content Manager for Exeter Writers.