Notes from the Lost. 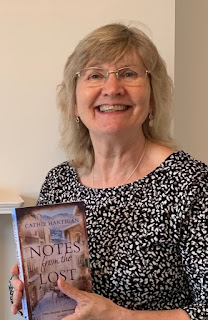 Exeter Writer member Cathie Hartigan has just published her second novel, Notes from the Lost, set in WW2 Italy and Exeter in 2000.

Amazon reviews:
‘The days of the war ended but the repercussions of events were still rippling through to the year 2000. Get the tissues out because boy will you need them. I was so very involved with the past as it unfolded and loved how things were developing in present day.
Ros didn’t just hold her own future in her hands she held the destiny of the people that she now knew as friends. What an incredible story. I loved the songs, felt like I could hear the music and adored the ending. Truly a wonderful read.’

‘The characters are vivid and compelling - Alfie is utterly lovable. I could not put it down and now my book club are all reading it and loving it too!’

Q: Can you, for those who don't know you already, tell us about your writing journey?
I was a hobby writer for a long time, but I took a creative writing correspondence course about fifteen years ago and my wonderful tutor encouraged me to take my writing more seriously. Since then I’ve won a few prizes for my short stories and co-authored a series of writing guides with Margaret James, the first of which is The Creative Writing Student’s Handbook. My first novel, Secret of the Song achieved one of those lovely yellow Best Seller flags on Amazon and was a runner-up in the Hall and Woodhouse/Dorchester Literary Festival novel competition. I’m part of the team that runs the Exeter Novel Prize.

Q: What was the inspiration for your second novel?
A television programme and then a chance conversation with a friend led to Notes from the Lost. I was chatting about the programme because I had found it so moving. It featured the story of many Allied soldiers who were captured and then escaped into the Italian mountains during WW2. What struck me was the bravery of the poor Italian families who risked their own lives by sheltering these young men. My friend then told me that his father was one of those soldiers and he had many of his diaries. When I read them, it became absolutely clear to me that I would write a novel which would in part be loosely based the experience of Captain William Wright. In the event, rather like Secret of the Song, I wrote another dual time frame book, so there is also a modern-day heroine who unwittingly reveals some family secrets that had been hidden for decades.

Q: If you could, which fictional character (from your own book(s) or someone else's) would you like to invite for tea and why?
Definitely Alfie Lovelace from Notes from the Lost. He’s always cheerful and kind in spite of having to overcome disappointment and considerable difficulties. We’d have great conversations about music, living independently, and the quality of Italian coffee.

Q: Is there a writer whose brain you would love to pick for advice? Who would that be and why?
It’s got to be Kate Atkinson, because she can do everything. I’d love to find out how she plots so tightly and yet makes the writing feel so spontaneous. Jackson Brodie is a wonderful character and I love the stories, but the depth of emotion and compassion she shows towards Teddy in A God in Ruins had me gasping.

Q: Are you a plotter or do you go with the flow, as a pantser?
I know approximately where I’m going, and the appropriate tone, but I’m not a detailed plotter. I like the discovery as I go along, and I rely on my story instinct to keep me from drifting in the wrong direction. If I do go astray, then I’ll cut hard on the redraft.

Q: Can you give novice writers some tips?
Firstly, join a group and/or seek help from those who are further along the writing road. I’ve been a member of Exeter Writers since 2008 and it’s the best thing I ever did. Not only did I meet some fantastic writers, but my own writing received honest critiques. I do think that one of the wisest things I have heard about being a writer is that you have to be sensitive in order to empathise with your characters and your readers, but also have the skin of a rhinoceros in order to deal with the advice! It seems to me that it can often be more painful, the closer it is to the truth.
Secondly, think of your reader – make sure that what is in your head is clear on the page so that someone who doesn’t know you at all will see, feel and understand what you mean.
Thirdly, and most importantly, never send off your first draft.

Q: Last question, can you give us a snippet from your book?
Yes, of course! This is the opening of Notes from the Lost. It’s October 1943 in the Italian Apennine mountains:
‘Get your kit, Alfie.’
Frank’s voice hisses in the dark, so close I can feel the heat of his breath on my ear.
Goodbye dreams of singing to my darling Dottie at Covent Garden. While I’ve been having forty winks, he’s done it. Smashed through the bolt with the smuggled pickaxe. I go to stand, but the swaying and juddering of the cattle truck is so violent, we end up half crawling and half thrown towards the open door.
Cold mountain air rips into every corner and down all the crevices between cloth and skin. Marvellous. I want to jump now, but the train’s going too fast. What’s the use of a broken neck? We’re in trees here, but the line of the ridge is visible ahead. I see it for a moment, before clouds smudge the bright moon. The air is fresh, but there’s something else that raises the hairs on my arms.
Out there, the big outdoors, forest, mountain, the inky sky of a million stars, it all means one thing – freedom. At last, at long, long last. 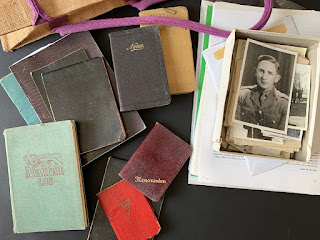