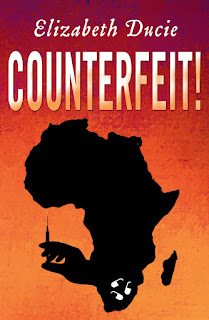 Member Elizabeth Ducie is hoping a recent competition success is a sign of things to come. Elizabeth is currently working on her second novel, Counterfeit!, which is set in Southern Africa and deals with dodgy goings-on in the pharmaceutical industry. It is the first in a series of three novels, featuring three strong female protagonists.

Back in September 2015, Elizabeth entered the opening of Counterfeit! for the Literature Works First Page Writing Prize and was delighted to learn just before Christmas that she had been placed third in an field of nearly 300 entries.

Elizabeth, whose debut novel, Gorgito's Ice Rink, was runner up in Writing Magazine's  2015 Self-Published Book of the Year Awards, plans to publish Counterfeit! in July 2016 under her own imprint, Chudleigh Phoenix Publications. She has recently finalised the cover, designed by the brilliant Berni Stevens, and is busy working on the final rewrite at the moment, prior to send the manuscript to her team of beta readers.
Member News