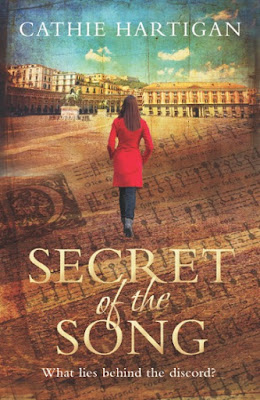 This Time-slip mystery is set in contemporary Exeter and Renaissance Naples. The composer of the song is the mad and very bad Don Carlo Gesualdo whose story is seen through the eyes of young Silvia Albana, seamstress and close confidant of Gesualdo’s wife. When she begins an affair, Silvia knows that death is the only outcome. But who will die? And why is Silvia’s own lover not there to help her?

Cathie tells us that she first became interested in the story of Gesualdo when singing one of his songs – called madrigals if written in the C15th or C16th – with a small group similar to the novel’s Noteworthy.
‘We found it difficult and quite unsettling, and it was then that I wondered about the phrase, a haunting melody. Just exactly how haunting can a melody be? That’s what got me started. Gesualdo was a real person and the more research I did, the more I felt for the poor servant, Silvia hopelessly caught up in that dangerous and violent world. The decision to write the novel with alternating chapters of past and present provided me with just the sort of challenge I like.’

‘As a big fan of the work of Barbara Erskine, I was delighted to discover a new Time-slip author whose first novel is a delight.’

‘This is an accessible, compulsive read with great characters, a cracking ending and I'll even admit to shedding a couple of tears at the appropriate points!’

‘If you enjoy the work of Kate Mosse, you will love Secret of the Song.’

Secret of the Song is available on Kindle and in paperback.
Cathie Hartigan Member News